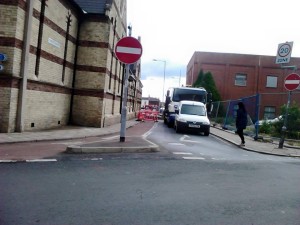 The link between the back of the old post office and the bus station has been dug up to rebuild a junction. No diversion has been signposted (contrary to what I was told would happen) but I'd suggest riding both ways past the swimming pool (on the left side of the road!) for this week at least.

Sadly, I think it's probably best for people on bikes to avoid the whole disaster zone until the KLTI works have finished, especially given there's now only at most 10 parking spaces accessible until mid-June (again, contrary to what we were told - the councils blame suppliers for delivering late - I blame the councils for pushing on with removal of the old cycle parks when they hadn't opened the new one). Instead, I'd park on the market places or Purfleet for the High Street and use Morrisons' 50-odd-space cycle park if you want a supermarket.

BUG volunteers have asked the councils to fix the various small-but-nasty errors in this £1.6m project before the builders leave and mostly without replies yet. This project still looks like an improvement, but it would be difficult to do worse than the old layout and it's frustrating for it to be so near but not quite right. This could be a flagship project, but will it be? I still can't tell.