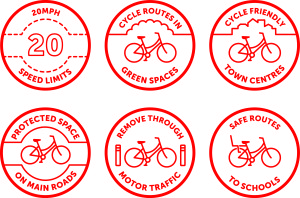 Responding to proposed plans for new buildings and changes is one of the few ways that we can tell developers what local cyclists want. Sadly, many developers either come from far away places where few people cycle or they seem simply not to understand what local cycling policies mean or something. Council officers spot some of the problems but not all of them, so we try to help out.

You can help too: if you agree with the following analysis, please add your own objection to the planning applications website and if we get enough, the plans should be reviewed by our elected councillors. We don't usually organise petitions about plans because the council regards a petition as only one objection, so it's better if you explain your objection in your own words. You don't have to cite policies, but if you want to, look at the earlier comments and you should be able to see mine and copy the policy details from it.

I have objected to 15/00828/FM Marsh Lane King's Lynn Norfolk which is the first of the Lynnsport Area housing projects, because they don't seem to have listened to the comments about the cycle tracks. Most importantly, they still show the new track north-south through the development on the WEST side of the road, which means it crosses the obvious potential rat-run route, and the crossing is the unsafe look-three-ways-at-once style. Ideally, the new cycle track should be on the EAST side where it would cross a residential close rather than the access road and could connect to the Galyon-Baldock cycle track more easily - but at least they should use a safer crossing design.

I've also objected to the neigbouring 15/01423/RMM Former Alderman Jackson Special School Marsh Lane King's Lynn which is a long cul-de-sac with poor cycling connections despite obvious opportunities - but the main objection is that the houses have neither ground-anchor sheds or garages, so there's nowhere to keep a bike securely.

Similarly, 15/01454/OM 118, 118A & Land At Rear of Bexwell Road Downham Market has obvious connection potential to Rouse's Lane to provide a greener walking and cycling route than Bexwell Road (the former A1122), but doesn't propose it.

15/01604/FM Land South of 8 Chapel Lane Ringstead Norfolk says that the new houses would be close to Hunstanton and National Cycle Route 1 connects to local towns, but ignores that the connections between Ringstead and Hunstanton involve tricky crossings of the A149 coast road that would deter many from cycling. I've asked for it (and any major developments in Ringstead) to contribute to cycle route improvements to Hunstanton.

Over in Clenchwarton, 15/01510/OM Land S Wildfields Close And W of 5 Black Horse Road has a similar problem. Its transport assessment claims people could cycle into King's Lynn, but doesn't offer to contribute to completing the cycle route over the cut bridge or between West Lynn and Clenchwarton. The road providing access to the development is also rather small.

I'm still choosing my words about 15/01575/OM Land Off Mill Road Watlington but its transport assessment claims there are off-road cycle tracks on Route 11 and I think it's mistaken. I think we should be asking for A10 route improvements and the proposed footpath to Glebe Avenue to be a cycle track.

If you agree with any of these, please use the reference numbers to add your objection comments at the planning applications website.

I think I've reviewed West Norfolk major applications up until 31 October 2015 but if you notice something I've missed that could affect cycling, or if you can help with the other district councils, please let me know.