Looks good, doesn't it? Look closer. Look, for example, at the Southgates roundabout, the five-arm junction towards the bottom-left:

Every arm is shown as having cycleways extending along them and the south-eastern one along Hardwick Road stops at the cemetery. In reality, there are no cycleways along the two northern arms (London Road and Vancouver Avenue). The Hardwick Road one continues all the way out.

Sadly, the map is a work of fiction. Almost all of the cycleways shown have been planned at some point, but many of them have never been built. Some like the ones linked to Harding's Way were cut due to budget overruns, as discussed previously. A few, such as Marsh Lane, were planned to be speed limits, cycle lanes or access restrictions (no through motor vehicles or similar) rather than cycleways but still even that didn't happen. We don't really know what happened to some of the others.

It's not as simple as the county council thinking they've built everything ever planned, as key routes like the Hardwick / A10 cycleway are missing from the map. Here's a map corrected to the best of my knowledge:

If you turn the unbuilt and substandard bits white, colour the green bits purple and paint the missing minor roads back in, you get a more realistic picture of the current state of our useful-but-very-incomplete network - actually only approaching a proper network in South Lynn and the Walks, with other areas like North Lynn, Fairstead, Springwood, Reffley and the Woottons basically having one decent route each: 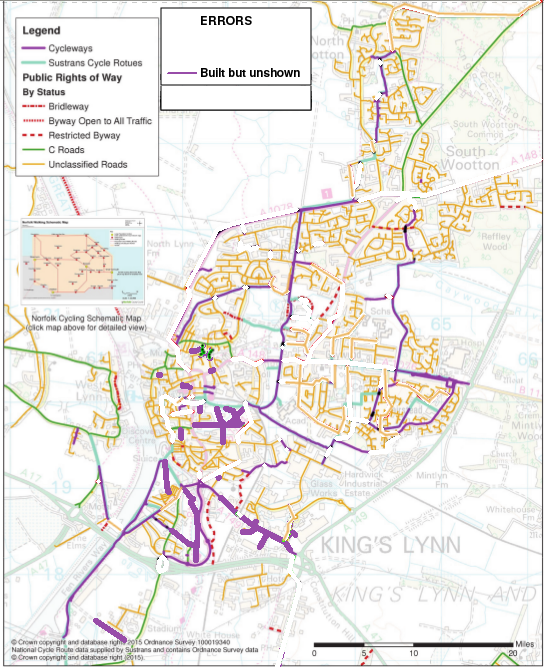 I'd say that somewhere between a third and a half of the official map is incorrect, which raises at least three questions: