I travelled down from Lynn to Lambeth for this conference by a mix of bike, train, cycle hire and walking. It was a pretty good event, albeit with a couple of drawbacks. 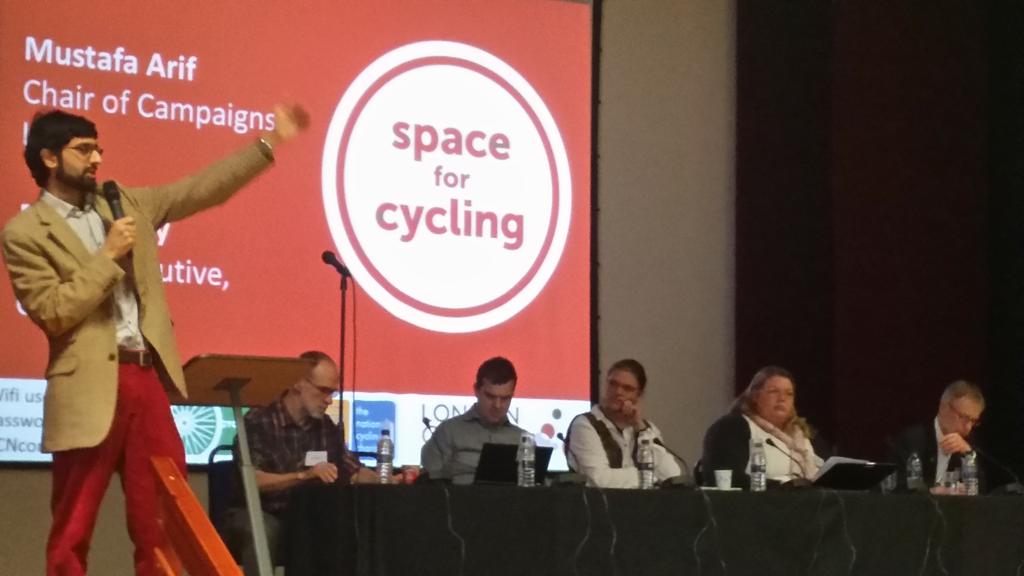 The Extraordinary General Meeting of Cyclenation (our national federation of cycling groups) was first. All four motions passed, even though I spoke and we voted against the fourth, as discussed online and at November's meeting. Cycle nation has an event report on its website.

The first session of the main conference included welcomes from CTC's Chief Executive Paul Tuohy, Lambeth Councillor Jennifer Brathwaite and an inspirational welcome from Mustafa Arif, Campaigns Chair of KLWNBUG's biggest sibling group London Cycling Campaign about the changes seen since London last hosted the conference 11 years ago. We're starting to see real change, but it's only a start.

The rest of the session was notable for what it didn't contain: we were expecting a video of Robert Goodwill MP, the minister that usually deals with cycling, but we didn't get it. Apparently Mr Goodwill didn't find time to record it. So DfT Officer Naomi Green read the speech (but it doesn't appear on the minister's web page), then made some comments about the Cycling and Walking Delivery Plan. What really caught my ear was a comment that it's hard for people in rural areas to complete journeys by cycling. We have 3 rail stations serving about a thousand square miles and few bus services after 6pm: so is this effectively abandoning rural areas like West Norfolk to the private car? I'll make a few comments about this in the consultation on that Plan which concludes this week.

The other talks in the opening session were from builders and campaigners. One from Birmingham, where the main point I took was that it's a good idea to get politicians out on bikes as early as possible - taking a group of councillors on a ride around central Birmingham was a bit of an eye-opener! One was from Bristol, a city I know well from living near it in the past - this was a talk by a council designer and so the presentation was a bit flattering in my opinion, like glossing over the city's huge "dead zones" with no cycle-friendly layouts. One was from Waltham Forest, explaining the experience of closing roads as part of a "mini Holland" scheme - interesting but I don't know how likely it would be here with our current councillors who seem scared of restricting cars.

A very interesting talk was about CyclingWorks.London, demonstrating the support for cycling from big businesses in London, contrary to what Canary Wharf would have one believe - maybe we should find out how many West Norfolk businesses support improving cycling? Maybe some head offices in London have already come out in support, so it should be easy to get local offices to echo that. There are certainly still lots of people riding to work around here and bosses would probably like them to be safer.

Over lunch, I met Shaun McDonald from our sibling group CycleIpswich. I think we might be working on a lot of similar problems (not least that we're both in the car-crazed New Anglia Local Enterprise Partnership area) and so it might be good for KLWNBUG and CycleIpswich to keep in touch and visit each other some time next year.

Then there was a session on design standards: the Active Travel Wales design guide, the London Cycling Design Standards, the evidence behind it and Making Space for Cycling. You may already know how much I like Making Space for Cycling, so I've taken a few more copies along to hand out to councillors and officers. The Active Travel Wales guide sounds interesting and its audit tool might be useful for us, but can we persuade Norfolk to adopt anything with Wales in its name? I'm rather worried about the London standards and its acceptance of things like wait-for-two-reds right turns (instead of jug-handle right-turns); but the survey of international evidence might be useful.

Then there were some workshops and another notable political absence: Andrew Gilligan, the Mayor of London's Cycling Commissioner, did not attend the conference, due to his involvement in a car crash (he wasn't hurt). Ironic. There was a panel session but I missed the start while returning from the workshop so I don't really understand who was on it. The panel overran (as had all the sessions throughout the day), so I had to leave before the closing comments.

Any questions? I'll do my best to answer... but here's the "Hard Messages" from the Making Space for Cycling talk: