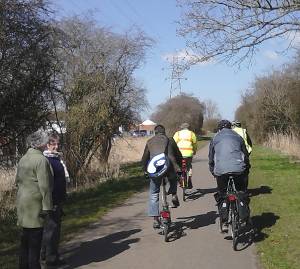 So, here's the email I sent to sustain the objection to yet another unnecessarily lethal T-Junction being approved by our councils. You may find it informative:

Which way should a person cycling northbound look? Left? Right? Over their right shoulder? It's panto season - they're behiiiind you!

Why is the lethal layout of the cycleway crossing of the central T junction in the Marsh Lane development not considered in the officer report? I submitted it as a formal objection because it seems so obviously contrary to the County Local Transport Plan policy on casualty reduction and the National Planning Policy Framework, so it's rather a surprise not to see any mention of it in the report.

That is almost a textbook example of the mistake analysed in http://www.klwnbug.co.uk/2015/11/18/lethal-t-junk-tions-developers-most-common-cycling-junction-mistake/ - That layout has been deprecated for years now (at least since the issue of Local Transport note 2/08 in 2008). With far better designs available from Cyclenation, Sustrans, the London Cycling Design Standards and others, there really is no excuse for building another one in 2016 on a site that has no constraints such as existing development or land ownership forcing it.

I have mentioned this at every opportunity since the intial draft plan consultation. I'm sure that if you build that junction, when KLWNBUG hears of the first cyclist injured on it, we will make the full timetable available to the victim and encourage them and their insurers to seek full redress from those responsible for designing and approving it.

In general, I am thoroughly disappointed with the failure to engage over the Marsh Lane housing area, especially following on what felt like a relatively fruitful engagement over the access road. Delivering car-centric developments like this seems like a good way to ensure that the predicted overloading of Wootton Gap occurs and that the full benefits of the new access road are not realised.

Thank you for your attention to this matter and I await your reply with interest."

So far I've had three replies: one from the planning officer saying that the junctions are outside the site boundary (they're not - I've been reading planning applications for years and I don't often make mistakes like that) and then another saying they'd "misread" our objections; and one from the developer's agent saying they'll "be in touch with you shortly" but time is running out and the council has published the above email on the planning applications website anyway, so I feel I should let bike users know what's going on. 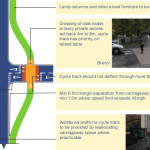 What happens next? I fear that they'll get permission for this on Monday if the councils don't see anything wrong with building junctions that are obviously dangerous to people cycling, contrary to borough (policy CS11 Transport says developments must "provide for safe and convenient access for all modes"), county and national planning policies; but ideally, the application will be amended to use current Cyclenation or Sustrans designs for the cycleway, with any crossing being on a raised table with good visibility and low motorist speeds, possibly on the orchard side of the feeder road instead of the housing side.

Please do whatever you can to discourage this being approved on Monday... if you live in West Norfolk, go to www.writeToThem.com and pick your borough councillor - and no matter where you live, please add your own objection to http://online.west-norfolk.gov.uk/online-applications/applicationDetails.do?activeTab=makeComment&keyVal=NOZZ9RIV05900 and say that you don't think the proposed cycle track layout is safe or convenient (the full drawing is "SITE PLAN NO 2" of 2 Jun 2015 if you want a copy) - or whatever you think might help...