In 2005, a new cycle track and river crossing provided a high-quality link between Reffley and Springwood in King's Lynn. The link connects the Queen Elizabeth Hospital and Springwood School with housing areas to the north of the Gaywood River.

However, north of Reffley School, and through to Grimston Road, the cycle route was marred by access barriers, making access impossible to many non-standard cycles (such as tandems, bikes with trailers, or tricycles), and difficult even for standard cycles.

Norfolk County Council has at long last taken action to improve the situation, and to make this cycle route accessible to cycles. Barriers on the northernmost section, between Grimston Road and Temple Road, have been removed. There is still an awkward right-angle bend in the path, but this cannot be resolved without redrawing boundaries. For most cyclists, the route is now a useful short cut. 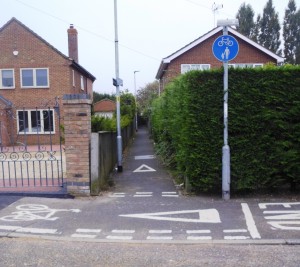 It's still quite tight with poor visibility, and one wonders whether the gatepost and hedge required or got planning permission. And the paint markings are somewhat bizarre, with a 'give way' triangle pointing in the wrong direction.

At least it's now accessible. 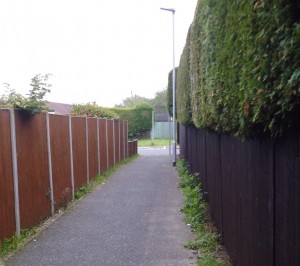 The approach to Temple Road

And here is the approach to Temple Road from the north. Again, barriers removed.

Again, poor visibility but much more accessible than it was before.

So many thanks to NCC for providing us with this relief!

South of Temple Road, the story is somewhat different. On that side of the road, NCC had also agreed to remove the barriers, yet they're still there. 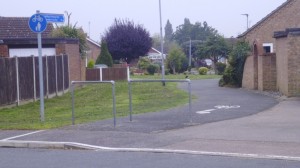 The barriers were initially (according to NCC) intended to stop unauthorised access by motor vehicles. The flaw in the design is quite obvious!

But for cycling, surely most cyclists will continue to ride on the grassed areas or on the driveway, rather than testing their slalom skills through the barriers.

Update (16/9/14): The contractors were asked to remove these barriers, and should now be going back to finish the job!

Where the cycle track meets Reffley Lane, the story gets worse. 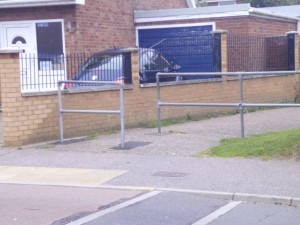 Originally, NCC had agreed to widen the gap between the barriers to improve accessibility. They have indeed done this, as you can see from the marks on the path: the left-hand barrier has been moved about a foot closer to the road.

Yes, it is easier to ride through now, although it will still be quite a challenge with a trailer or tricycle. But a far better solution was available (and was proposed to NCC), yet it was not used.

NCC were keen to retain an access control at this point due to the proximity to the school. However, they could and should have removed the left hand barrier and then placed it a suitable distance behind the right-hand barrier. Not only would this have allowed for a greatly increased spacing between the barriers, it also would have provided a larger space between the barriers and the main footway/carriageway on Reffley Lane, as recommended in current design guidance. This buffer zone is desirable, for example, when a family group of cyclists cross the road, to avoid them having to congregate partly on the road.

All in all, then, NCC have improved the route and made it accessible to most cyclists, but they have only done half a job on Temple Road, and for no more money they could have done a much better job on Reffley Lane.